My previous post on global payments attempted to convince you that the cross-border segment of global payments is fast-growing and has an attractive profit pool.  In this post, I focus on the challenge of cross border payments and the first of two public companies that compete in this segment, Earthport.   After these two posts, you can decide if you want some exposure to the cross border payments market.  (In my next post, I’ll cover INTL FC Stone.)

The Problem with Cross-Border Payments

The problem with cross-border payments is the correspondent banking system.  This rather informal system ensures that a typical transaction between a buyer and supplier in two different countries (and likely currencies) will be”touched” by 4-5 banks along the way.   Each bank may charge fees and use protocols that it has established on its own.  If you Google “correspondent banking” you can read treatises about the process.  In fact, one of the best papers on the subject is published by Earthport, in conjunction with Glenbrook Partners. (Glenbrook being real experts in payments, unlike me).  Here’s a chart of a typical transaction between a UK buyer and Singapore supplier from that Earthport paper: 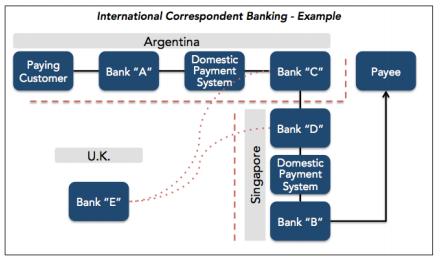 The result of the correspondent banking approach is a very expensive system that offers little visibility for its participants and can be effectively different in every country.   Most companies who compete in this market are either: a)trying to figure out how to standardize participation, regulatory compliance, and protocols for this loosely affiliated network of banks or b) go around the system as much as they can.  Examples include Western Union and the credit card networks–but these alternatives take hefty fees as well.  (To be very fair, fluctuating currencies, increasing regulations, and protectionism do bring plenty of complexity!)

From what I can tell, Earthport is basically trying to assemble (using several existing standards) an international ACH network.   Earthport will “white label” this network for existing participants in the global payments ecosystem (e.g., banks).  In particular, Earthport is focused on higher volume, lower value payments such as remittances, payroll, peer-to-peer, e-commerce royalty and benefits payments.  Their emphasis seems to have been on transaction processing, and until recently, less so on currency conversion.

I suspect Earthport is concentrating on the low-end of the market for two reasons:

Earthport’s web headline is  “The largest open network for global bank payments”.  Here is how Earthport describes their business model, in words and chart.  (Warning:  The first part sounds like something out of the TV Show Silicon Valley.)

The Earthport model is a positive disruptive force in the industry. Earthport innovates through its cross-border payments service model. It challenges the existing models for international payments supported by wires/correspondent banking, outdated by decades and originally set up for high value payments.

Earthport leverages efficiencies inherent in ACH clearing schemes. Its service is based on netting and clearing clients’ International payments locally in over 60 counties, achieving efficiencies similar to domestic payments.

It is an ambitious strategy for a private company to take on both in scale and in the potential for conflicts with various participants.  Earthport wants to disrupt part of the system, but do so with the banks who profit from it.  Not an easy task.

After many years of trials and tribulations (i.e., “pivots”), Earthport is making progress. Earthport grew 67% on a like-for-like basis in its year-ended June 30, 2014.  Earthport also made two acquisitions during the year.  Earthport posted revenues of £10.8 million for the year-ended 6/30/14.  For the six months ended December 2015, they posted revenue of £8.7 million–or 90% like-for-like growth versus the prior period.  (Complete results on the first six months of FY 2015 are due in mid-March.)    Earthport’s growing client list is impressive:

The BofA deal was for $11.3 million in revenue, but also involved substantial warrants in the company.   This type of deal makes sense to drive usage in the network, but was also a big accounting issue in the bubble years–it complicates revenue recognition in the US.  Earthport’s investor list is also impressive,  including the IFC (part of the World Bank) and Oppenheimer.

There are a few issues that make investing in Earthport a risky proposition:

I love the market and the concept of what they are trying to do, but cannot bring myself to invest at these prices.   I know how hard/expensive it is to build a utility and monetize it under the noses of these participants.  I’ll sit and watch this one for a while, perhaps there will be a time when the risk/reward ration looks more appealing.

In my next post, I’ll address INTL FC Stone, a public player in cross-border payments headquartered in the US.  That one I do own.