Last week MINDBODY (MB) (all caps, no CamelCase) went public on the NASDAQ. MINDBODY describes itself as the “leading online global wellness marketplace”.  Here’s how MINDBODY depicts its business:

MINDBODY sells to 42,000 gyms, yoga studies, salons, spas, and other “wellness”  destinations software for managing their businesses–from appointment booking to staff scheduling to point of sale and mobile apps.  They also provide an integrated payments processing capability.  ( I love that part.)  This is the applications part of the business.  MINDBODY wants to be, and says it is, a marketplace because: 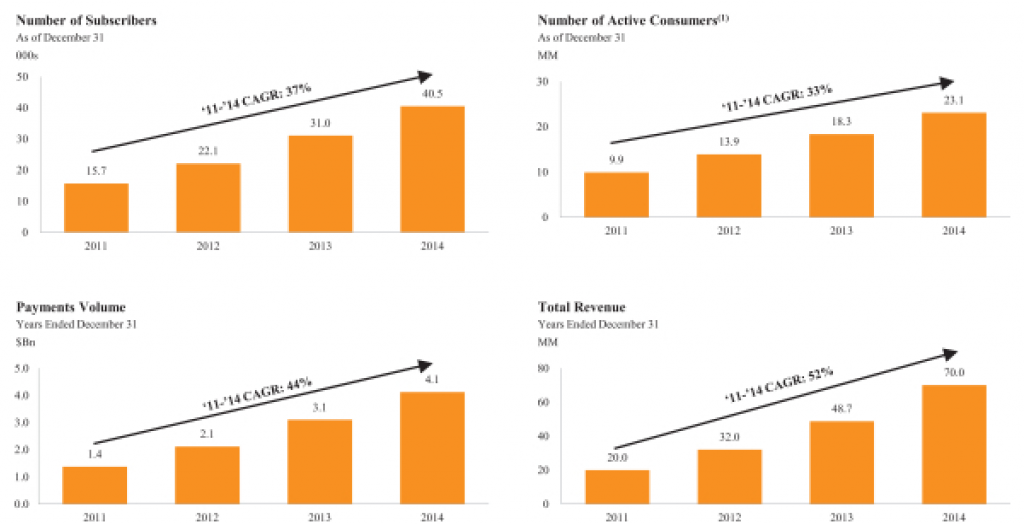 There is also plenty to question about MINDBODY:

My brother feels I misunderstand the opportunity. Apparently, the new thing in fitness is to book classes at a bunch of different places, rather than pay a monthly membership at one place.  If this is the case, perhaps there is a marketplace.  (There is already a hot company called ClassPass that buys unused capacity at boutique studios at a discount, aggregates this capacity, and remarkets it to consumers in the form of an unlimited monthly subscription.  No reason MINDBODY could not do this too.)

It all sounds very young, SF, LA, and NYC to me!

MINDBODY sports a market cap of about 8x revenue or about $550 million.  (It is selling almost exactly for its IPO price.  The stock price fell rapidly early in the week and recovered.)

OpenTable had a market cap of $700 million when it went public, which was about 15x-20x revenue.   Clearly the market liked that OpenTable was already profitable.  At that point (May 2009) OpenTable probably could not have gone public if it had not been profitable. (Anyone remember those days?)  As you may recall, OpenTable was then a roller coaster, exploding in value, dropping back down to $900 million in market cap and finally selling for $2.6 billion (to Priceline).

Based just on this simplistic measure of value, MINDBODY does sell at a discount.  However, my list of reservations (pun intended) about this stock is still too long to get excited, especially this early on.

MINDBODY like OpenTable before it, is a fascinating example of building one side of a marketplace first (to a large extent) and then trying to add the other side.  In both cases, the strategy is to sell an application that stands on its own merits (electronic reservation book for OpenTable, MINDBODY software and payments platform) and then bring in the other sides later–consumers, employers, etc. Some have called this the “come for the application, stay for the network” approach to solving the “chicken and the egg dilemma” faced by all marketplaces.