I’ve never really known what to make of Tradeshift.  Tradeshift started in Europe towards the end of my tenure at Ariba (2010).  I never really ran into Tradeshift much, except that I admired their ability to generate a lot of press for what seemed like it was going to be another free (for suppliers) European e-invoicing network.  That was not very exciting.

It was clear from the start, however, that Tradeshift, like Coupa, had one really big advantage in starting 13 years later than Ariba: Tradeshift could be entirely cloud-based from the start.  It was also clear that Tradeshift’s idea of having open APIs and building a platform on which other companies could build applications, (a la Salesforce’s platform) was an intriguing idea that could make Tradeshift unlike any other supply chain ecosystem.  Tradeshift could become, in theory, the Salesforce.com of the supply chain, as one bright Tradeshifter told me.

The question, of course, is how to get to solve the Chicken and the Egg dilemma to become a broad-based supply chain platform.   Salesforce sold a great application that has stand-alone value to thousands of companies before they built and exploited the force.com platform and appexchange.  (And still the platform and app exchange are not the heart of the business.   It is the sales cloud, services cloud, and perhaps some day the marketing cloud that make the company.)  Don’t get me wrong, Salesforce is the God of SaaS.  It has become the standard in sales force automation and built an enormous ecosystem, but it is a fundamentally different sort of platform than an inter-enterprise network. Many observers miss that subtle point.

Tradeshift started by offering free-to-supplier e-invoicing to start building the platform–and solving the “chicken and the egg dilemma”.  The service appeared to have a great UI and slick CloudScan technology to accommodate paper and pdfs.  Tradeshift even added some dynamic discounting and supply chain finance.  (Today Tradeshift announced that C2FO is building an application on their network.) Tradeshift continues to have good, if self-reverential, marketing.  In all, it looks like a nice, competitive package.

The good news for Tradeshift in starting 13 years later than Ariba is that all of that slick technology now exists.  The bad news is competitors and switching costs also have amassed in that time frame.  I suspect Tradeshift has realized e-invoicing, supply chain finance and  a great UI may no longer be enough to get the flywheel really moving.

Tradeshift appears to be moving “upstream”, if you will, from e-invoicing into a more complete procure-to-pay and supplier collaboration tool.  In other words, they are moving up from e-invoicing towards Coupa and Coupa is moving down from procurement towards them.  (Though Coupa has a much bigger customer base and a big headstart.)

Tradeshift would argue they are more “open” and “networked” in their approach than Coupa–particularly given their platform approach.  That may be a fair assessment.   But Coupa takes advantage of its architecture to offer network-based services such as a GPO and exhibits network-based thinking in other areas of their product (e.g, benchmarking).  Coupa also pursues an “open” network, no supplier fee structure and would point to e-mail based invoicing  for suppliers as a slick example.  I’ll let the two of them do battle on the “open” and “network-based” fronts!

Here’s a screen shot from Tradeshift’s website that captures everything interesting about Tradeshift in a nutshell: 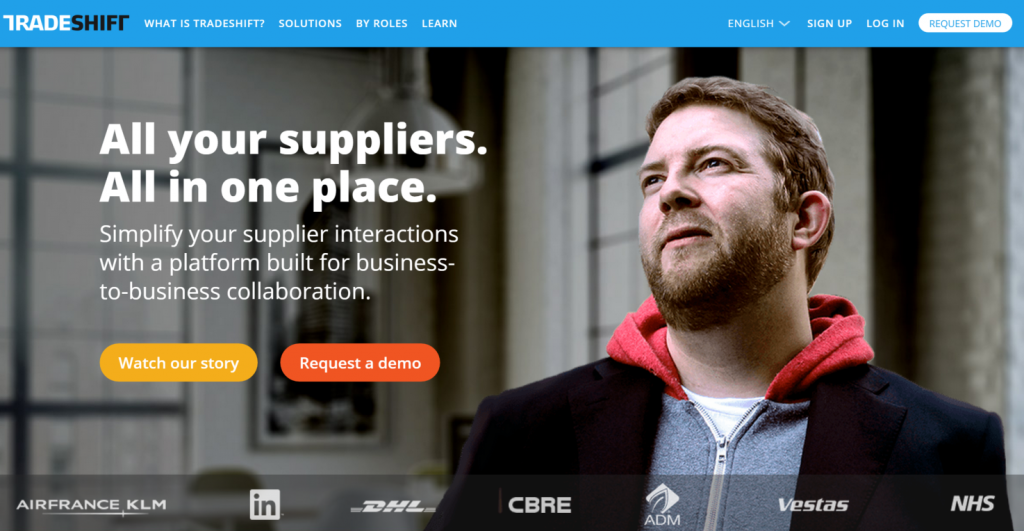 Tradeshift has a lot going for it:

Now the question is, how will they solve the chicken and egg dilemma? Free e-invoicing alone will not cut it these days.  Coupa offers that and a free procure-to -pay collaborative process for suppliers as well.

Salesforce built a “platform” by selling a great application that had value on its own.  Ariba built a network by first dominating the e-procurement category.  Tradeshift needs to find the application, strategy, or niche that will get their network effect jump started.

(BTW, I know the website claims 500,000 companies and suppliers in 195 countries that already use Tradeshift.  Those of you who play this game know how squishy those metrics can be.  When we see more metrics (on buyers and transactions) we will know the Chicken and the Egg dilemma has been solved.)