Software Platforms: First Celebrated, Now the FANGs are out!

Do you how many people have said to me “Bob, you have not posted a blog in a long time!”?  None.  Despite this dispiriting lack of encouragement from you the reader, I soldier on knowing how you really feel!

For most of 2016, the articles about major software platforms (e.g., the FANG stocks, such as Facebook, Apple, Netflix, Google, AirBnB, Uber, Amazon, etc.) were about value creation.  And, don’t get me wrong, these articles continue.  For instance, ICYMI, the New York Times recently ran a great article on the best investments since 1926 with the following graphic: 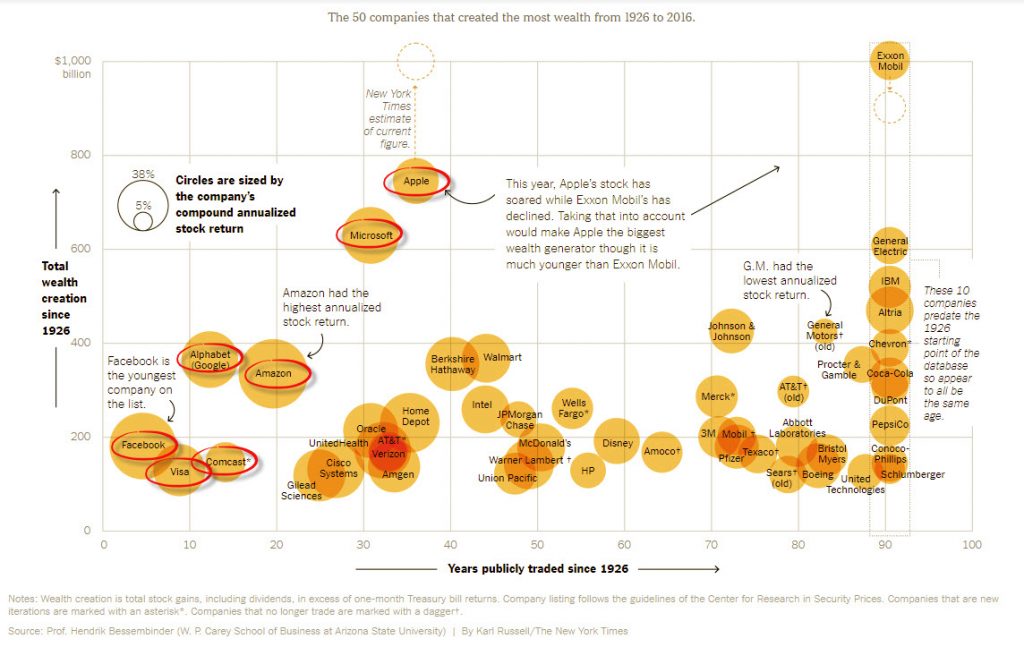 I’ve taken the liberty of highlighting some of the key software platforms driving valuations in the last 20 years.  (By the way, Mastercard, another platform winner must have just missed the list. Mastercard debuted with a market cap of $5 billion in 2006 and now sports a market cap of $150 billion!)  Of course, the private companies Uber and AirBnB do not appear on the chart.  They reportedly have valuations of $30-$70 billion+ and have been around 8-9 years without going public yet.

But lately, most of the press about these high profile software platforms has been about their possible “abuses of power”.  Hence, the bad pun that the FANGs are out!

From Congress to Europe to US town halls, it is now fashionable to question the size, scope, and business practices of these gigantic FANG companies and other upstarts.

None of this is especially surprising if you know your business history.  Or if you understand the the “winner-take-most” dynamics of software platforms.  But the swiftness with which the tide seems have to have turned on these giants is rather remarkable.  There has been a perfect storm of events to focus attention on the power of these FANG platforms and others like them:

It all goes to remind you that if you are lucky enough to create one of these platforms, you not only need to gain the trust of and keep the multiple sides of your platform happy, you have to do the same for the “outside world”.  That outside world often includes many constituents whom your platform may have dis-intermediated or crushed with your success.  They really are out to get you!