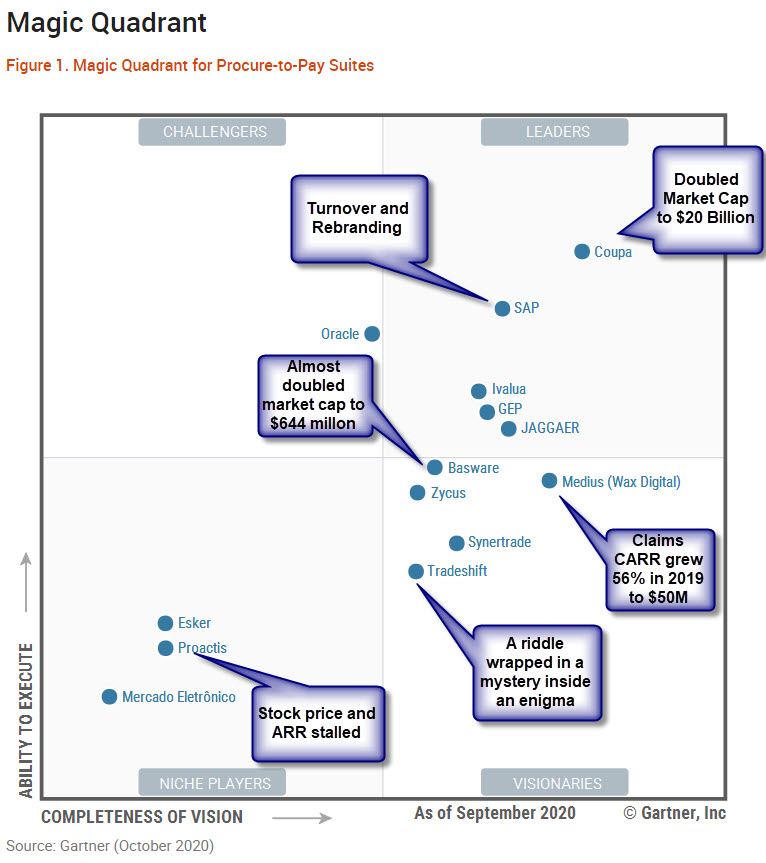 The main change for Coupa over the past year is its continued topline growth (40%+) and its growth in free cash flow.  Combined, these changes make Coupa a “Rule of 60” company.  As a result, Coupa sports a market cap of $20 billion and an EV/revenue ratio of 40x!  (As a reminder, SAP purchased Ariba, Concur, and Fieldglass for less than $15 billion.) 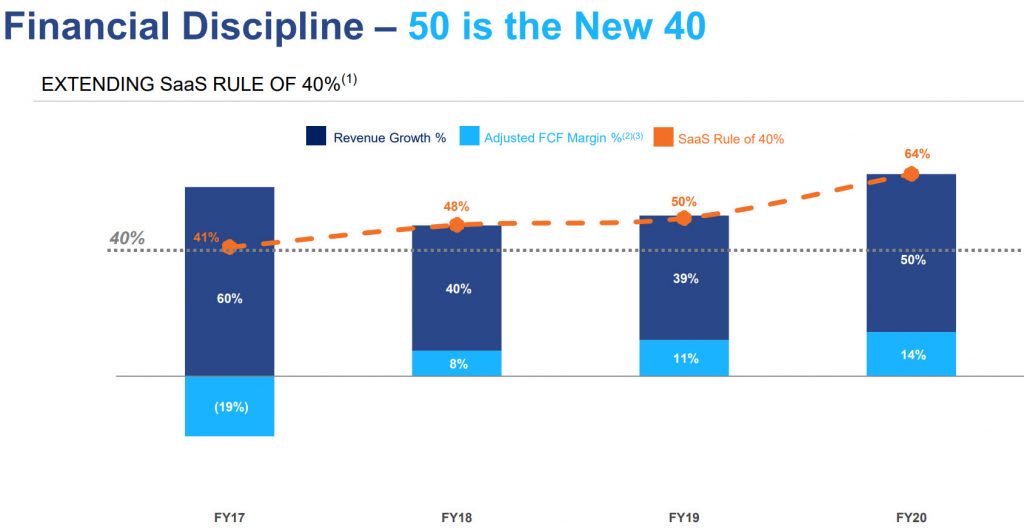 I hate to be snarky about my old employer, but the main news coming out of SAP, SAP Ariba, or SAP’s Intelligent Spend Group has been about management turnover and reorganizations.  At this point, things are so confusing I cannot even tell you if the SAP Digital Supplier Network is the same as the Ariba Network or how this relates to the Intelligent Spend Group.  From the outside, let’s just say things look a bit discombobulated.

In late 2019, Medius bought Wax Digital.  In early 2020, Medius and was kind enough to disclose some good growth numbers in revenue, CARR, and the number of customers, though it was not clear if these were organic growth numbers.  Medius is owned by Marlin Partners who knows this market and how to grow and flip companies.

I’m not sure what to tell you about Tradeshift.  In early 2020, Tradeshift announced a raise of $240 million at a unicorn valuation to “help accelerate growth and set the company on a direct path to profitability in the near future.”  At the time, the company also announced rapid sales and network growth.  Since then, Tradeshift has announced a new CFO and CRO and made few customer or revenue-related announcements.   As to what is really going on, your guess is as good as mine.  (Tradeshift’s Glassdoor entries suggest management and (disgruntled?) former employees disagree on what is going on as well.)

These are all fine companies and it’s cool to see them in the procure-to-pay suites leader quadrant fighting with the giants.  With a new owner in 2019, Jaggaer has installed a new team of well-regarded veteran managers.  Jaggaer is also seeking FedRAMP approval, while Ivalua has already achieved this approval.  The two companies must be duking it out in the public sector.  GEP has historically been more of a consulting company with technology, than the opposite. Perhaps they can overcome the difficulties of becoming the reverse.

Basware’s stock has rallied in 2020 with its market cap now exceeding €550 million.  The company is growing its SaaS revenues, though its other services are flat or down.  Basware is still transitioning from a license and maintenance model whose revenues are shrinking dramatically. The company’s EV/Sales ratio is a modest 4x because its “Rule of 40” metric is under 10.  (Remember Coupa’s EV/Sales ratio is 40 and its “Rule of 40” metric is about 60.) 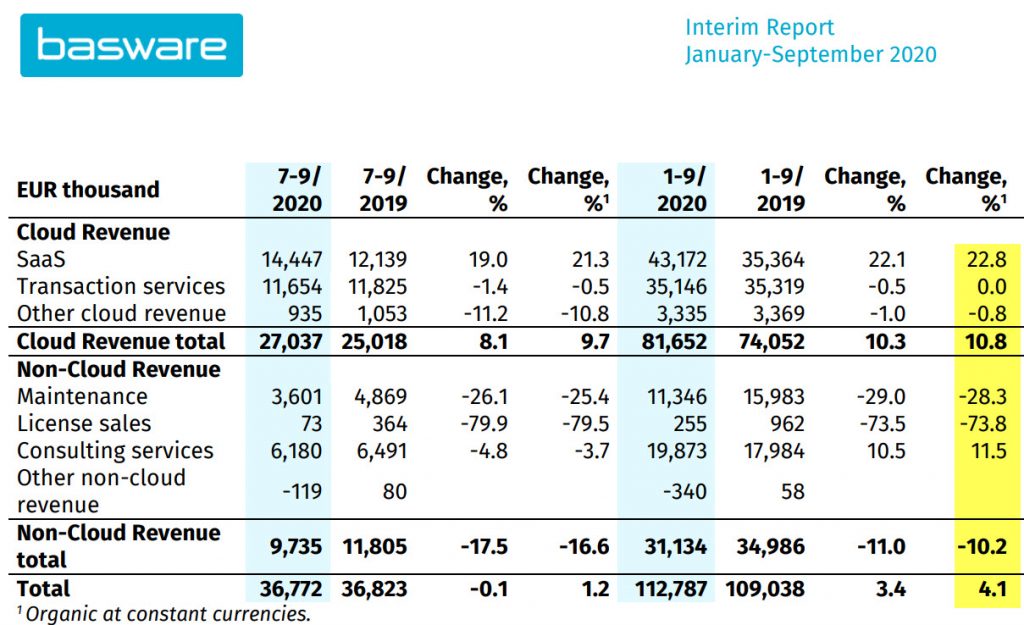 Proactis reported financial results for the period before Covid hit.  Early in 2020, Proactis was optimistic that ARR could start growing again.  Covid may have laid waste to those plans. 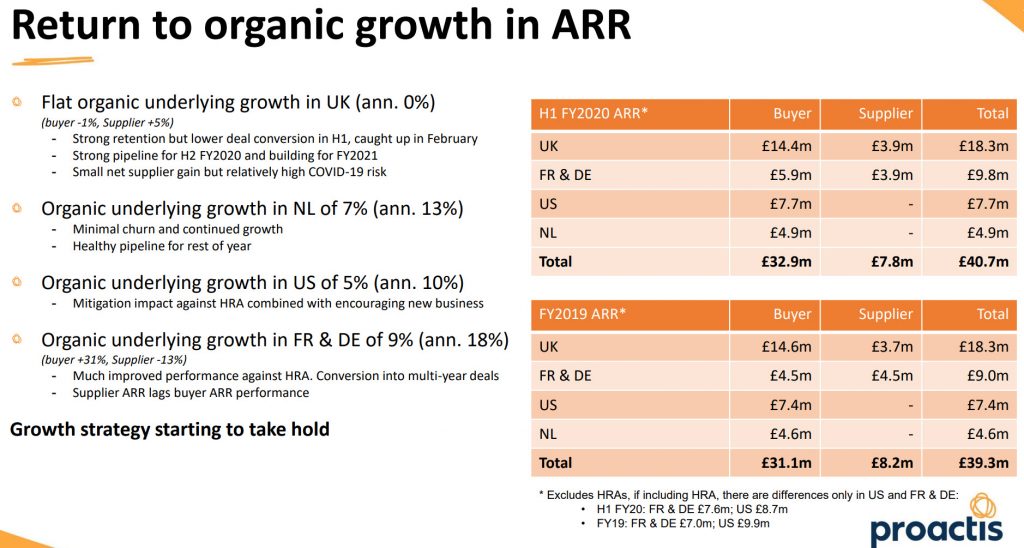 The stock has fallen this year as revenue was down for the first six months of the fiscal year and free cash flow was modest, so the “Rule of 40” is 0 or less.  EV/Sales is about 1.5x and Proactis’s market cap is about £30 million because Proactis has about the same amount of debt.

It’s still a battle for #3.  Statistically, Jaggaer is probably in that spot, so maybe we will see it go public via a SPAC!  Ivalua is battling to catch up. Everyone else hopes for just a small piece of that Coupa valuation.